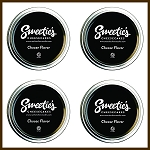 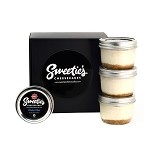 I guess you could say that my interest in food started in my parent’s kitchen while
growing up in New Jersey. My mom’s family was Polish, my dad’s family, Italian.
Food was always an important part of our family life, and we took turns preparing
and consuming delicious Polish and Italian meals; Rigatoni with meatballs cooked
in a thick tomato sauce on one day and Kielbasa Kapusta the next.

When I was a child, my Polish grandparents lived with us. My first experience in the
kitchen was when my Polish grandmother let me help her make cookies at Christmas.
She would make her nut cups and I would operate her Androck orange, plastic,
hand-cranked nut chopper.

My father was always eating something unusual.  He would take a trip to Brooklyn
over the Verrazano-Narrows Bridge and come home with brown bags full of things
you couldn’t find at Foodtown, our neighborhood grocery store. Immediately he would
start cutting pieces of capicola, sopprasata, Topolino, and pecorino.  He would say,
“Here Mike, try this!”  I think he was trying to give me the experiences he had when his
father had him try these foods for the first time.

Finally, there is my mom, who is an incredible baker. Although she usually bakes pies
and cakes once she made a cheesecake for me.  I think this was the first time I ever had
a cheesecake and I loved it.  That cheesecake didn’t last very long, so I asked her to make
me another.  My mom loves baking, but she said, “Michael, I can’t make you a cheesecake
every weekend!”  So that’s when I needed to learn to make my own.

Trying to satisfy my love of cheesecake, I began baking my own, and in a way, that’s
where Sweetie’s began, though it would take a few years and a few twists and turns in the
road for Sweetie’s Cheesecakes to come to life.

As a teenager and a young adult, I worked in a number of different restaurants, selling my
first cheesecake at age 16 to one of my fellow workers. Occasionally, I also helped out one
of my best friends who was a professional chef, and it was during this time that I met Shannon,
the wonderful woman who would become my wife.

After a fairly long courtship we married, and I graduated from Stevens Institute of Technology
in Hoboken, NJ with a degree in engineering management. Not long after that, we decided to
move to Texas to be closer to Shannon’s family, and while I found work in fields like information
technology and market research, somehow I just wasn’t happy. Something was missing.

Then life took an unexpected turn. The firm I was working for in Plano went through a number
of changes, including hiring a new CEO. Layoffs began, and in the third round of those, I
found I was no longer employed.

Later that same day I met Shannon to break the news. Shannon told me that she and our children,
sensing my unhappiness, had been praying that something exactly like this would happen.

But what next? It took a year or so to find my bearings, but after a lot of prayers, encouragement
from friends and family, and yielding to my God-given talent, I came back to my original love of
cheesecake, and falling back on my recipe…Sweetie’s Cheesecakes came to life.

flavors that change throughout the year.

Right now, you can find us at various farmers’ markets and other venues in the area, and

sometimes in the cooler of your favorite coffee shop.

The story of Sweetie’s Cheesecakes, which started back in my parent’s kitchen, is just getting started!

So who is Sweetie?  Sweetie was my dearly departed kitty cat.  Love you Sweetie.

We will keep you notified of all the sweet things.

Sign Up for notifications about new events, new flavors
and other Sweetie's news. 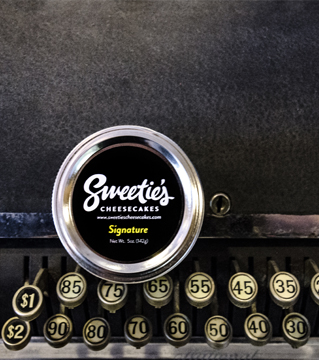